Shadow of the Beast II is the second chapter of a video game series with a distinct dreamlike, misterious atmosphere, and with suggestive and timeless landscapes. This is a third person platform horizontal scrolling game, released by Psygnosis in 1990 for Amiga and subsequently released for Atari ST, Sega Mega Drive, Mega CD and FM Towns.

The second chapter improve the poor playability of the predecessor (which was particularly difficult to finish) and focuses more on the puzzles than on the action, which was very difficult or cumbersome. As well as the graphic look and feel, with its parallax effects and its particularly tidy sprites and settings, the soundtrack, composed and produced by Tim Wright, remains one of the highlights of the series.

As well as all Psygnosis products, the game packaging was black in color, enhanced by the designs of a master such as Roger Dean. The cover image is composed by the background, whose title is Sentinel (1990, acrylic on canvas, 36 × 24 inches), inspired by the desolate landscapes of Utah and Arizona, and from a group of three mechanical frogs also painted in 1990, acrylic on board, 30 × 20 inches. 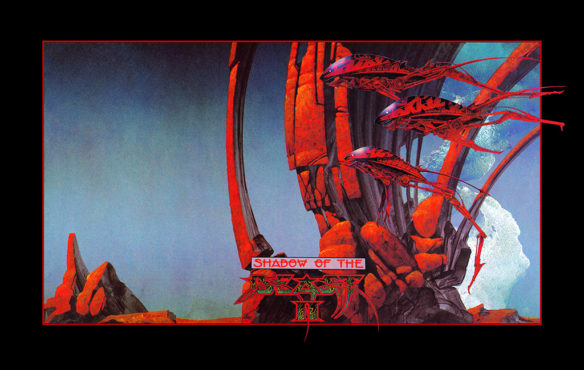